Here is a definition of this musical genre, proposed by the Association des producteurs et éditeurs d’illustration musicale (France).

What is library music?

This refers to collections of music previously recorded, usually released on production music themed albums and intended for audiovisual and media professionals to use to add soundtracks to feature films, documentaries, TV or radio shows, theatre plays, advertisements, bonus DVDs, websites, corporate films, mobile telephones and for any other use.

Composers of library music are reputed professionals in the music world. A number of these professionals produce for disc and for stage, playing for renowned artists, composing for cinema, documentaries or advertisements… The same production tools are used for library music as for commercial productions and the quality of the catalogues is indisputable.

What is its purpose?

Library music is known for meeting specific technical demands such as: exact duration, mount points, alternating periods of time to allow for speech, etc. Record companies have the task of making records successful, the job of library music producers is to provide audiovisual and media professionals with musical solutions by offering a service that is fully adapted to their needs:

Finally, here is a qualitative approach to these pieces of music, by means of a text (most probably written by the sound engineer Robert Prudon) presenting the record Musique de scènes n° 2 by Pierre Arvay, released in 1962 by Teppaz.
On the sleeve of this library music disc, one of the few available to the general public at that time (because it was issued by a non-specialist label), Robert Prudon described these pieces of music and the difficulties sometimes encountered in having them recognised as full works in their own right. 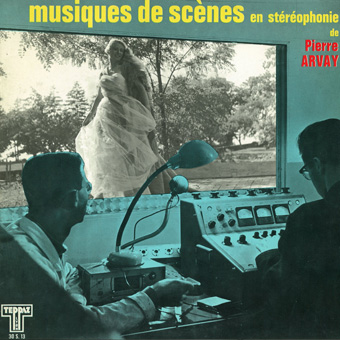 "If we may take the liberty to write these few introductory lines, which will seem superfluous to many, it is because we believe there is a problem with light music (in which we generally include music referred to as incidental music) which is that we very often refuse it to give it the virtues that we willingly (and ‘a priori’) attribute to so-called serious music. […]

If music is really the product of man – the art that Stravinsky speaks of – let us not forget that it is also the art of combining sounds in a way that is pleasing to the ear. As Debussy said, it must give us immediate pleasure, regardless of any intellectual consideration, and it must impose and impinge on us, without us having to make any effort to grasp it. That said, there is nothing really other than good or bad music, whatever the intended genre is. This is what Pierre Arvay attempts to show, in a domain in which many fads have contributed to reinforce the scorn of those who display a certain air of superiority towards a genre that allows itself to immediately satisfy spirits deemed too simple, who go straight to the music without prejudice or afterthought.

The 16 works contained on this recording are not banal musical equivalences which largely imitate the scenes they are attempting to illustrate. In fact, they are original compositions in their own right and intended (in their essence) to extract what the images cannot say, their secrets, what they neither confess nor explore. One passage will reveal in a moving way the tenderness of familiar landscape. Another will highlight the true dimensions of a dramatic scene because, contrary to what we commonly believe, it is most often the music which ‘gives birth to’ the image. Surely anyone can see that Brahms’s B minor sextet has done more for Les Amants by Louis Malle than the most beautiful scenery in the world could do for La Pastorale, that most descriptive of Beethoven’s symphonies.
As these pieces of music possess the magical gift of crystallising beauty and giving meaning to each image, Pierre Arvay provides in them the proof that he is a true musician".