Pierre Arvay (Turin, 1924 - Bagnols-en-Forêt, 1980) is a French composer, orchestrator and arranger, particularly well-known in the field of library music.
He also worked under the pseudonyms of Jean-Claude Roc, David Prieston, Peter Mills and Cham Staker.

After classical training, notably taught by Jean Batalla (piano) and Henri Büsser (composition), Pierre Arvay began his career composing songs for Yves Montand, Annie Cordy, François Deguelt and others. He also appeared on the radio, playing piano in several musical programmes and wrote accompanying music for various programmes.
He was, in addition, artistic director of Parisian cabarets – including the famous Échelle de Jacob to which he invited artistes such as Jacques Brel, Cora Vaucaire and Léo Ferré – while continuing to compose, especially classical works (ballet, toccata, etc.) but also original soundtracks for the cinema and television.

Pierre Arvay’s career took off when he joined the Chant du monde and Sidéral labels, then the Teppaz label, for all of which he was composer, arranger, orchestrator and artistic director of several record collections. Teppaz gave him the opportunity to record music of every genre, including contemporary classical compositions such as the Images symphoniques. There were therefore a lot of records, among which was the first 33 RPM record of library music to come out in France: Musiques de scènes.
Following the success of his works in the field of stock music, he was approached by the De Wolfe Music label – a specialist in this genre. He went on to compose for this company and its subsidiaries for nearly twenty years. His music was distributed all over the world, the records being reserved for media professionals.

At the same time, Pierre Arvay was managing his own library music label, created as part of producer and presenter Pierre Bellemare’s Técipress production company. The Técipress music publishing operation went on to become In Editions.
With the other artistes he recruited, Pierre Arvay composed a musical catalogue that grew rapidly and was offered to professionals on audiotape; some records such as the Timing collection were nevertheless pressed (in partnership with De Wolfe Music), to facilitate promotion. This Técipress-In Editions catalogue is now managed by music publisher Kapagama.

Pierre Arvay also passed on some of his technical knowledge as he was invited for several consecutive years to give classes in singing and rhythm at the Conservatoire National Supérieur d’Art Dramatique in Paris.

From so-called "serious" music to the more "commercial", Pierre Arvay created an eclectic repertoire, giving free rein to that melodic verve and those qualities of orchestration which brought him his success. Most of the titles being dedicated to the stock music industry, his name is little known by the general public, as composers in this field are rarely mentioned. However, today as yesterday, the music of Pierre Arvay goes with us and forms part of our everyday environment, whether at the cinema, on the radio, television, Internet or in some public places. 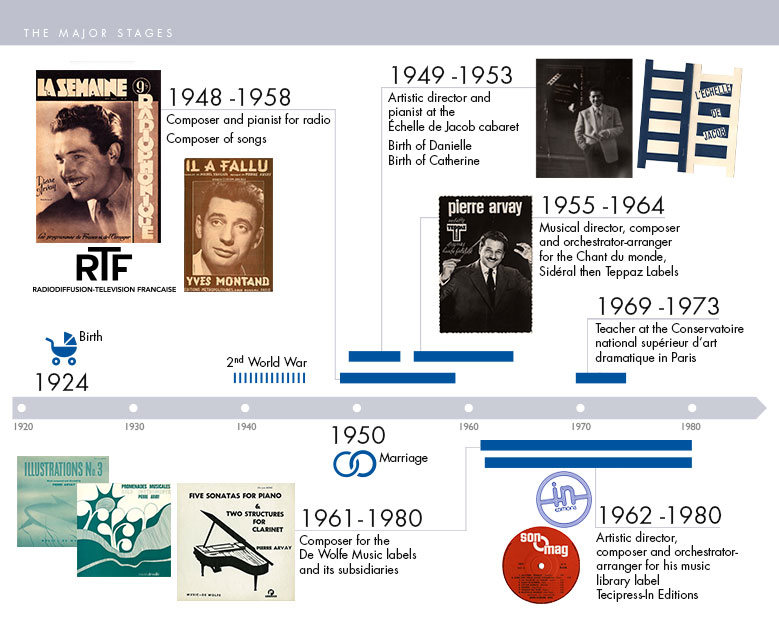