The little goose, Sidonie, and the young sow, Aglaé, live happily on a farm, under the protection of the rooster, Agénor. But the fox, Croquetou, breaks in and plays every trick to try to trap the two friends…
Browse the list of the episodes.

As well as the accompanying music, each of the 65 episodes involves one song.
There are 65 songs, of which 36 are different (including the sung closing credits), that recur over 26 musical themes (some have been used several times with different words). Most of these songs, as well as the theme tune, were marketed: browse the records in the Discography.

The opening theme is not, in fact, an original composition: it is a rearranged version of the piece Merry Ocarina by Pierre Arvay, released on the 1964 album Illustrations n° 2 (De Wolfe Music, 33 RPM n° 2823).
With regard to the accompanying music, where some has been composed specially by Pierre Arvay for the series, some is stock music from his album Illustrations n° 6, released in 1966 (De Wolfe Music, 33 RPM n° 3057).

Note that the first season of the series was destroyed in the 1970s by a fire in the laboratory where it was stored. The only trace that remains of it is the disc Les Aventures d’Aglaé et Sidonie, edited in 1970 by Adès-Le Petit ménestrel (33 RPM 17 inch, n° ALB 112), which returns to four episodes of this season in which Aglaé and Sidonie meet. It can be noted that the spoken voice was different: in fact Lola Arvay was asked to use a high-pitched and reedy voice that was eventually dropped in the following seasons, Lola Arvay taking then a more natural tone.

The theme tune – with the alternative version of the closing theme (‘Bonsoir’ instead of ‘Au revoir’) used in some episodes of seasons n° 4 and 5 – and an extract of all the songs: 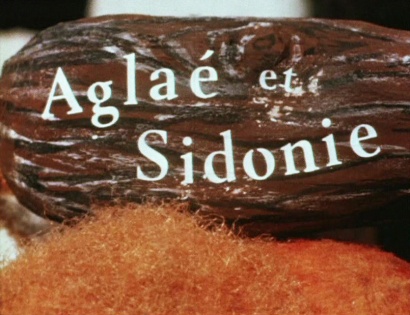